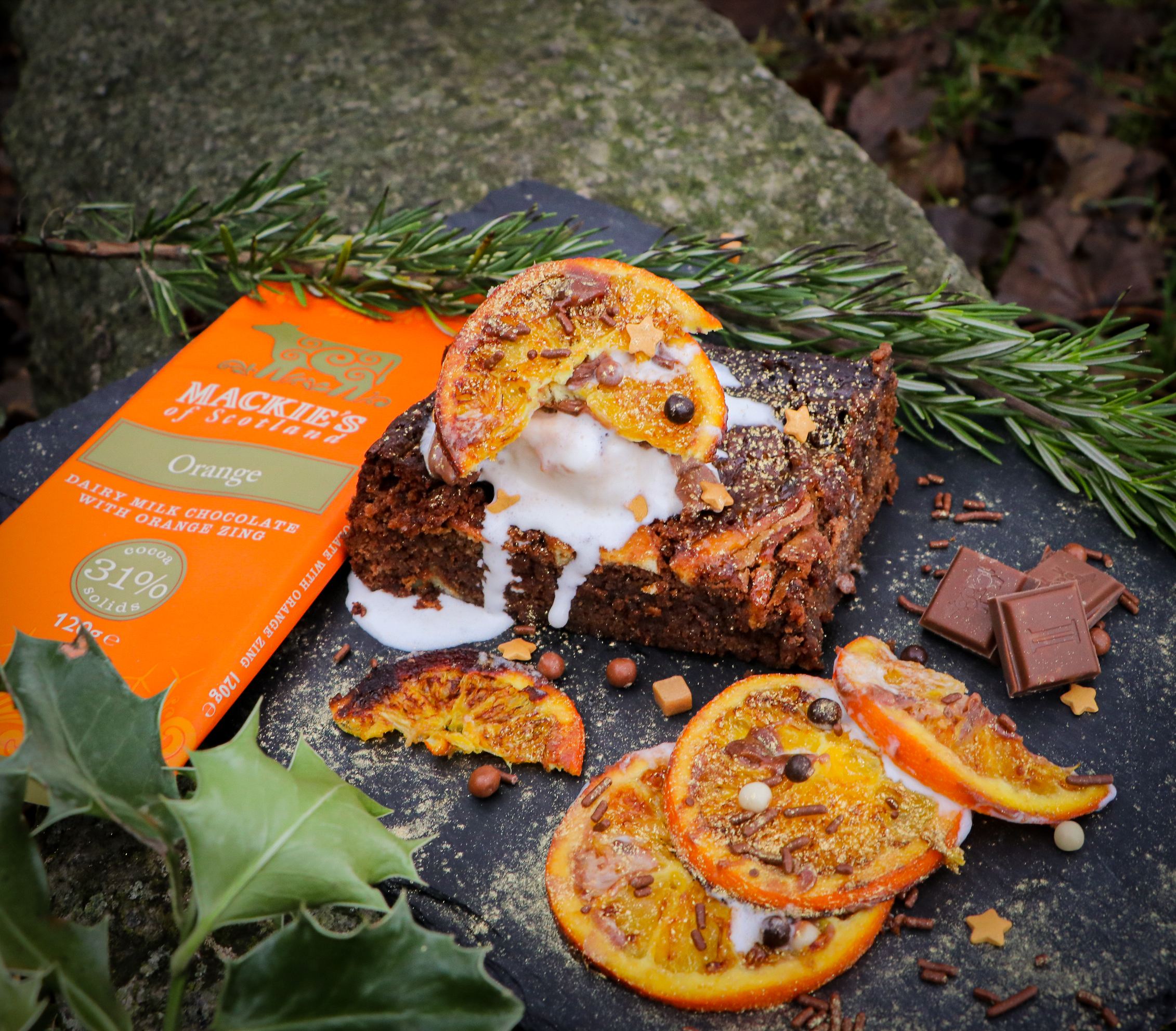 This delicious recipe is in collaboration with Mackies of Scotland to create this Christmas Orange Chocolate Brownie with Mackies Orange chocolate and their well known Traditional Ice cream. It’s the perfect recipe for Christmas day!

This recipe uses the NEW Orange chocolate by Mackies of Scotland and their Traditional Ice Cream on the top. It’s such a delicious Christmas treat and if your making it for Christmas day you can save time by making it ahead too.

This recipe will be using the NEW Orange Chocolate bar and traditional Ice Cream from Mackies of Scotland. The traditional ice cream works really well with the orange brownie and you can serve the brownie warm or cold it works both ways. All you have to do on Christmas day or whenever your having this treat is take out your chocolate brownie from the fridge, warm it up in the oven if nessecary, melt the chocolate sauce and mix with the double cream. It really is so simple but delicious and impressive on the Christmas table.

Mackies of Scotland are a family run business in the North East of Scotland and are well known across Scotland for their delicious range of real dairy ice creams, chocolate bars and crisps. They also have their own chocolate factory which is biult in an old tractor shed. Pretty cool!

Mackies are one of our favourite Scottish brands and we literally grew up eating their Ice cream in the Summer months and enjoyed it with hot puddings in the Winter too. Their traditional Ice Cream goes really well with hot desserts like Apple Pie, Fruity Tarts and perhaps some Clootie Dumpling or Christmas Mince Pies. Their New Orange chocolate is so creamy and delicious and is perfect for creating chocolate dishes with a difference or if your anything like me snacking on it watching Christmas TV.

They have a new website coming soon but in the meantime you can find out more about their products at – https://www.mackies.co.uk/

Mackies also have an awesome Ice Cream parlour in Aberdeen City and they have a whole range of delicious Ice Cream treats and desserts on offer. Its a great fun filled place to go with the family and we love a trip there when we are in the town with the kids.

If you are enjoying this recipe you may also like these other Scottish recipes to make this a delicdious three course meal. The Cock a leekie soup is a popular Scottish starter and the Traditional Scottish Beef Stew would also work around Christmas time or even for hogmany.

You may also enjoy some of my recent blog posts below: